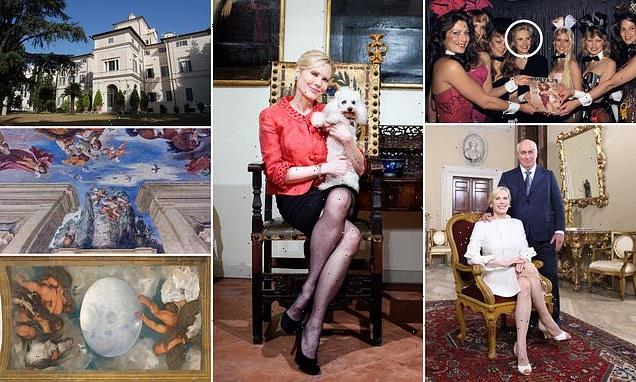 Yours for £400m… the world’s priciest home: The vendor is a Princess who posed for Playboy, the decor is by Caravaggio and Michelangelo. And the reason for the sale? A bitter feud with her stepsons

For sale: an imposing 16th-century villa in one of Rome’s poshest neighbourhoods covering more than 30,000 sq ft over six floors, plus two acres of formal gardens.

This stunning property — a former hunting lodge on a hilltop site once occupied by Julius Caesar’s palace — has what estate agents might call bags of potential.

But it is also in need of serious renovation: the basic cost of sorting it out is estimated at 11 million euros (£9.3 million).

One thing the lucky buyer certainly won’t be doing, however, is getting decorators in to re-paint the ceilings.

For Villa Aurora happens to boast the only surviving ceiling fresco by Michelangelo Merisi da Caravaggio. 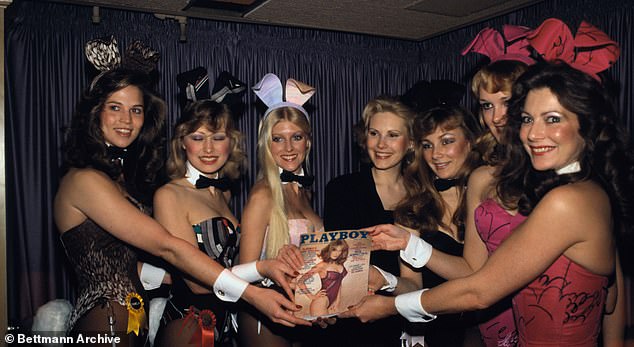 Princess Rita Boncompagni Ludovisi (Middle) decided to appear in Playboy magazine, posing in a feather boa in a photoshoot to accompany an article that she’d written, headlined The Liberation of a Congressional Wife 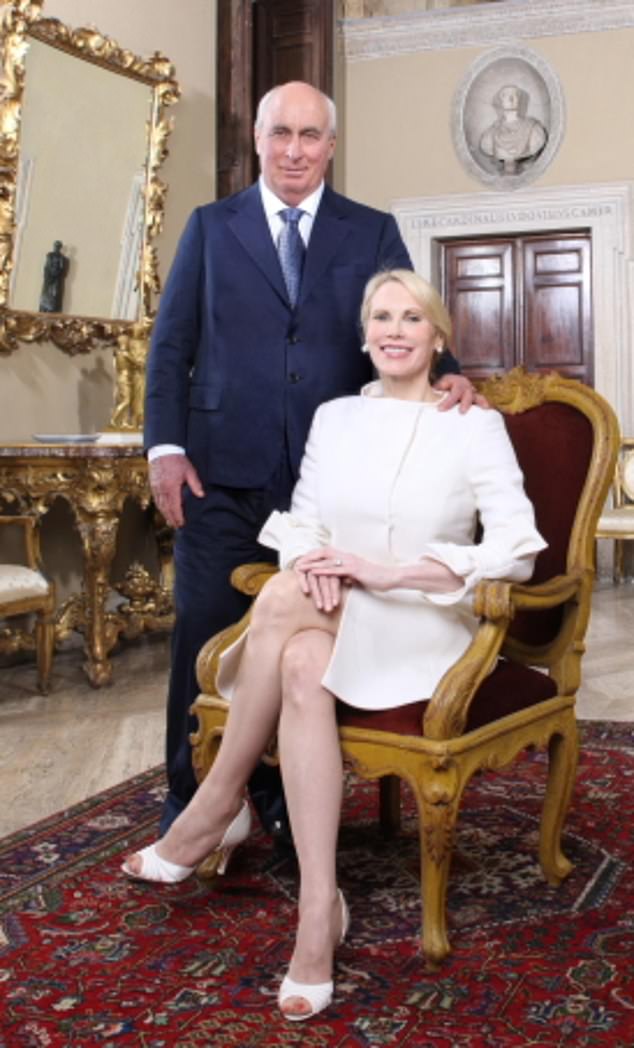 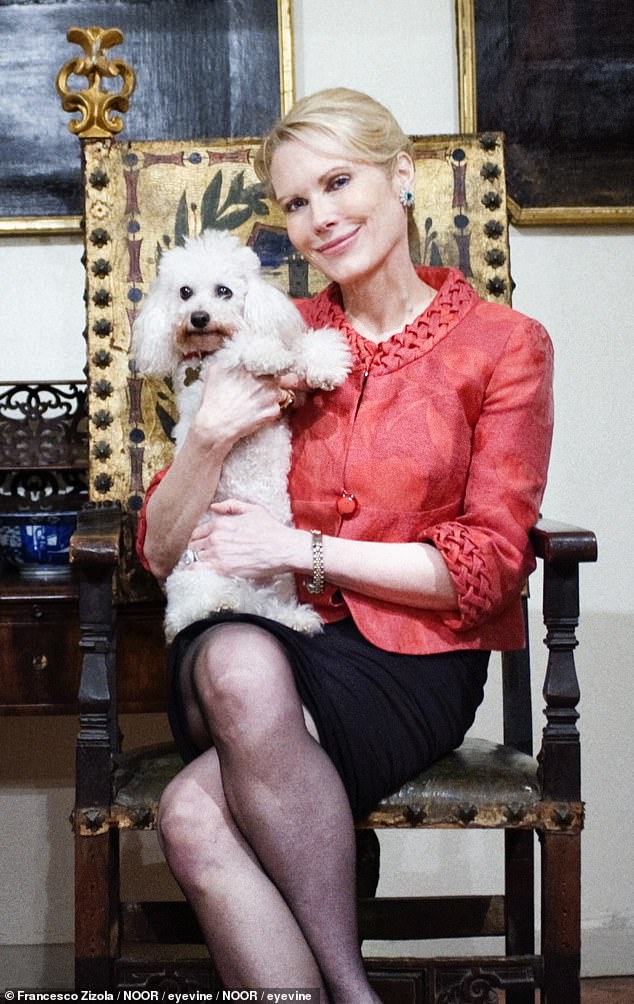 Princess Rita (Pictured) in the 16th-century villa, which is located in one of Rome’s poshest neighbourhoods

Tucked away in a small room on the second floor, Jupiter, Neptune And Pluto was completed by the Baroque artist in 1597 at the behest of the property’s then owner, a cardinal who wanted to jazz up a small room he had decided to use as an alchemy laboratory.

The stunning picture, measuring 10 ft across, shows the three Olympian gods with their characteristic elements: air and sulphur for Jupiter, water and mercury for Neptune, plus earth and salt for Pluto.

At some stage, it was covered up, only to be rediscovered under peeling paint in the 1960s by an art historian named Giuliana Zandri. He concluded that it contained self-portraits: Caravaggio had used his own face as a model for each deity.

Tradition dictates that such unique and historic masterpieces are described as ‘priceless’. But in this particular case, the fresco has a price: it has been valued by independent experts at 310 million euros (£262 million).

That in turn is the main reason bidding will start at 471 million euros (£399 million) when Villa Aurora goes under the hammer in January. Should it sell, that would make it the most expensive home ever, eclipsing a Hong Kong residence covering 51,000 sq ft, which changed hands for around £261 million in 2017.

‘Let’s just say you are buying a Caravaggio with a house thrown in,’ is how the current owner, Her Serene Highness the Principessa Rita Boncompagni Ludovisi, puts it. 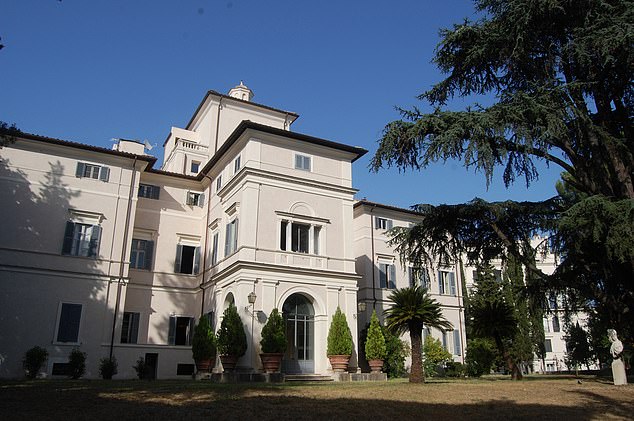 The property — which dates back to 1570 — also contains a statue of Pan attributed to Michelangelo on its gravel drive, while the entrance hall is dominated by a huge ceiling painting by Guercino, another baroque artist.

There is a Roman bust of Augustus on a staircase and marble columns with inlaid pearl throughout.

Its art collection was assembled by the Ludovisi family, aristocratic descendants of Pope Gregory XV, who purchased the pile in 1620 and have held on to it ever since.

They are being forced to sell up owing to an inheritance dispute that dates back to the death in 2018 of the 71-year-old Principessa’s husband, Prince Nicolo Boncompagni Ludovisi.

The late aristocrat had three sons — Francesco, Ignazio, and Bante — from the first of his three marriages. 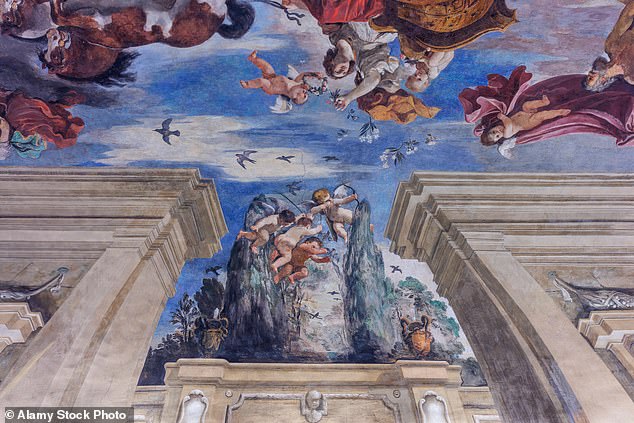 The property’s art collection was assembled by the Ludovisi family, aristocratic descendants of Pope Gregory XV, who purchased the pile in 1620 and have held on to it ever since

They have spent years battling their stepmother, Principessa Rita, over the fate of the property. Things concluded with a ruling that Villa Aurora should be sold at auction. She will get half the proceeds.

‘I wanted this house to become a museum, but I am tired of going to court, and the court was fed up with the suing so has ordered the house to be sold. It’s heartbreaking,’ she said this week, adding that her late husband had always resisted selling, despite offers from Bill Gates and an Arab sheikh. ‘To think of this house falling into the wrong hands devastates me.’

Asked how many rooms the villa has, she added: ‘Nicolo used to say, “We don’t count our rooms.” It’s at least 50.’

This isn’t the first time Principessa Rita’s family life has made headlines.

Born plain Rita Carpenter, in Texas, she was educated at Harvard and spent much of the 1970s in Washington DC as the wife of John Jenrette, a Democratic congressman from South Carolina.Their marriage hit the buffers in 1980, when he was convicted of accepting a $50,000 bribe, in what became known as the ‘Abscam scandal’.

She subsequently decided to appear in Playboy magazine, posing in a feather boa in a photoshoot to accompany an article that she’d written, headlined The Liberation of a Congressional Wife. 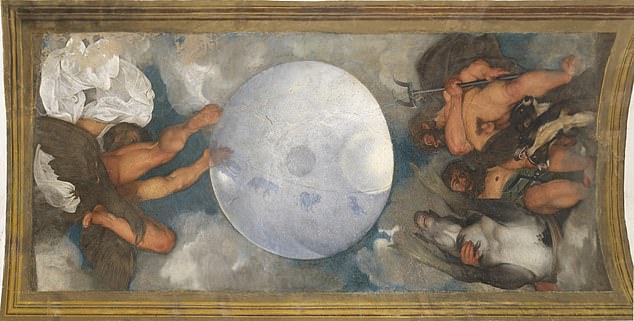 The main reason bidding will start at 471 million euros (£399 million) when Villa Aurora goes under the hammer in January. Should it sell, that would make it the most expensive home ever, eclipsing a Hong Kong residence covering 51,000 sq ft, which changed hands for around £261 million in 2017

In it, she accused her former spouse of serious infidelity and claimed that once, during a break from an all-night session of Congress, she and Jenrette had ‘made love on the marble steps that overlook the monuments’ in front of the U.S. Capitol.

The revelation made global headlines, and an autobiography, My Capitol Secrets, came out later that year. It was billed as the true story of ‘the lady who blew the lid off Washington.’

Rita next moved to Los Angeles to capitalise on her notoriety by pursuing a Hollywood career.

She appeared on, among other things, an episode of the TV drama Fantasy Island as a character called Nurse Heavenly, and in a film entitled Zombie Island Massacre. After the acting jobs dried up, she moved to New York to try her hand as a TV news reporter.

Later, during the 1990s, she became an estate agent. Her biggest deal involved the 1998 sale of the General Motors Building to Donald Trump, who promptly installed his name in 4 ft-high gold letters above the front door.

Rita’s life changed once again in 2003, when she was telephoned out of the blue and asked to work as broker on a potential development deal involving Prince Nicolo. ‘They called me and said, “We have this prince who would like to develop a hotel on his property,” ’ she later told the New Yorker magazine.

‘I said, “Oh, for heaven’s sakes! Everybody in New York calls themselves count or prince or whatever — they’re not.” ’ 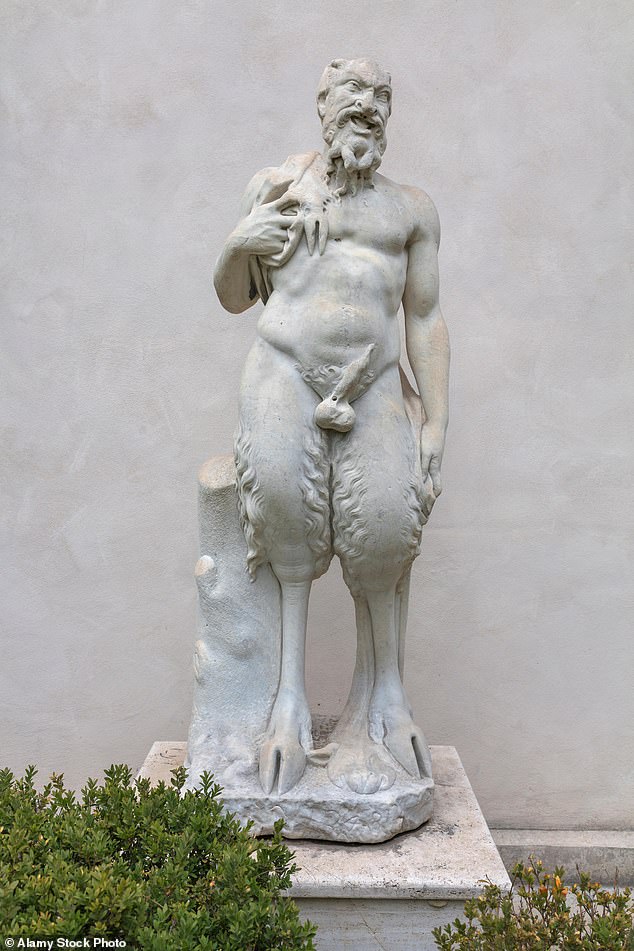 The property — which dates back to 1570 — also contains a statue of Pan attributed to Michelangelo on its gravel drive, while the entrance hall is dominated by a huge ceiling painting by Guercino, another baroque artist (Pictured)

Eventually, she agreed to go to Rome and soon realised that her client was the real deal. The Prince, for his part, fell in love at first sight.

‘It was probably written in the stars,’ he later recalled. ‘I said, in the clumsiest way one can even imagine, “Well, you are not ugly.” She’s beautiful, of course, but she’s as beautiful inside. She’s candid like a child but shrewd like a fox!’

The couple (who married in 2009) spent around £10 million preserving their property, and each month would invite visitors on paid tours of the home and gardens, which would culminate in their being invited for tea.

Their 15-year relationship was, however, the cause of friction with his sons that appears never to have been resolved. ‘When they were small, you would’ve eaten them up,’ the Prince once told an interviewer, regarding his three boys. ‘When they grew up, you sort of regret that you didn’t.’

Now, it is, of course, ending with the sale of the historic family seat.

‘I hope whoever buys this house loves it as much as I have,’ Principessa Rita said this week.

Her best chance of preventing Villa Aurora falling into the hands of a free-spending oligarch, Arab sheikh or flashy vulgarian is for the Italian government — which will conduct the sale on January 18 — to decide to buy it.

It can do that thanks to a preservation order, which gives the State the option to buy historic properties and artworks, provided they can match the closing bid.

‘It’s an extraordinary work, which was difficult to put a price on, seeing as it was the only mural ever done by Caravaggio, and so we had nothing to compare it to,’ says Alessandro Zuccari, a history professor at Sapienza University in Rome, who oversaw the valuation of the mural on behalf of the authorities.

‘It’s a place that’s unique in the world . . . The state will have the right to buy it; the problem will be whether it can pay such a high price.’