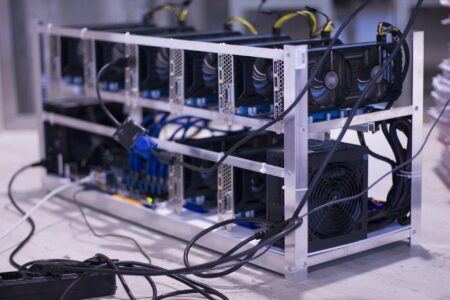 A new report published by Elwood Asset Management has revealed that publicly traded cryptocurrency mining firms are moving from being relatively small in the industry to become significant industry players.

The in-depth report details that publicly traded firms including Argo Blockchain, Hive Blockchain, Marathon Patent Group, Riot Blockchain, and Bit Digital have been able to raise around $800 million over the last two cryptocurrency boom and bust cycles, which allowed them to spend millions on new mining equipment and gain a larger foothold on BTC’s mining scene.

It details that Marathon Patent Group is likely going to “establish itself as the largest listed cryptocurrency mining company by mid-2021” based on an analysis of delivery timelines. It will be followed by Riot Blockchains, with Give Blockchain coming up next after ramping up capacity.

It adds that the Bitmain Antminer S19 appears to “be the machine with longest lead time of all” with deliveries averaging nine months. Its delivery dates have, however, been “largely skewed” because of Marathon’s massive order for 70,000 units, set to be delivered between July and December of this year.

Elwood Asset Management also analyzed the capital expenditure of the listed cryptocurrency miners since 2019, used estimates for companies that did not publish deal amounts, such as Bitfarms and Hut8. It estimated values for these firms using achieved prices by other companies for the same equipment, or market prices for machines others did not acquire.

In total, nearly $500 million were invested. The report reads:

Using this methodology, we found out that the listed miners had spent over $488m on mining equipment between January 2019 and January 2021. Out of that, Marathon ranks first as the biggest spender, with $245.6m in deals.

After breaking down investment by listing countries, it found companies in the U.S. came out on top, making up more than three-quarters of the total investment from listed companies, followed by those in Canada and the UK.

It’s worth noting the analyzed listed miners account for 13% of the cryptocurrency mining market, with other companies accounting for 87%. Nevertheless, the report concludes these companies “seem to be becoming significant industry players.”