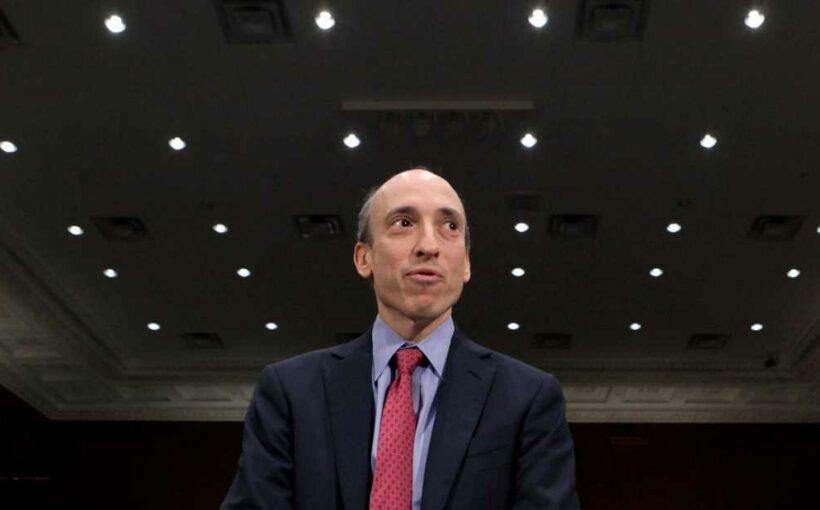 Gary Gensler, the chairman of the Securities and Exchanges Commission (SEC) is to receive payments by Goldman Sachs that in a 2009 disclosure for his previous position as chair of the Commodities Trading and Futures Commission (CFTC), he said was to begin in 2022.

Back then he said he was to receive $6,700 a year in a defined benefit plan with a “value not readily ascertainable.”

There is no relevant public event listed on World Bank for that day and Gensler does not show up when searched as speaker.

That may have been a private event therefore, just months before he was to be nominated as SEC chair, with it unclear what was said in that meeting.

Overall Gensler has between $50 million to $100 million in investments, almost all of them in stocks.

Despite repeatedly stating he was a professor at MIT teaching blockchain – for which he still receives royalties due to a $2,600 course – and despite writing some editorials on blockchain and bitcoin innovation, Gensler nonetheless has never bought bitcoin or any other crypto.

He instead has almost all his net-worth in the stock market, making it in his vital interest for the stock market to increase in value, but has no stake in crypto so doesn’t care if it crashes or otherwise due to his actions.

He has no stake because it appears he thinks cryptos are a fad. Comparing them to “private money” in a recent interview, he said:

“Public money has a certain place around the globe. Private monies usually don’t last that long. So, I don’t think there’s a long-term viability for five- or six thousand private forms of money.”

Gensler was also a member of the fintech advisory group at the Federal Reserve Bank of New York until he became SEC chair, with him previously stating stablecoins may provide competition to central banks. Now he says they are “poker chips” as the Goldman Sachs pensioned regulator tries to be more and more bombastic to get attention.

While chair of CFTC he was accused of exceeding his authority and of going too far. Now as SEC chair he is accused of the same in considering the lending and borrowing of stablecoins as somehow being a bond.

In addition in the 2009 public disclosure Gensler revealed one of his biggest investment was in T. Rowe Price, an asset manager with some $1.6 trillion for both retail investors and institutional investors.

The 2020 filing does not mention this stock, but a stated Annabel Lee, LLC, described as a family investment LLC, appears to hold most of his wealth and somewhat conveniently in the 2009 filing Gensler said “the fund’s manager declined to provide me with sufficient information to enable me to disclose the fund’s underlying assets in my financial disclosure report.”

The 2020 filing thus mentions only Tesla as a specific stock, presumably to look a bit hip, in addition to numerous indexes like the S&P 500, Vanguard’s Europe index, as well as Money Market Funds.

These disclosures are not audited as far as we are aware. No third party has gone through his accounts to independently verify whether what he is stating is actually the case or otherwise.

We have to take him on trust thus, including that he can’t fully disclose what thisAnnabel Lee holds, but from what has been disclosed, like hisT. Rowe Price investment, one can maybe see why he is going against Robinhood, the investment app, rather than so called dark pools for institutional investors which may allow them to manipulate the price or against naked short selling that almost had Elon Musk take Tesla private.

His Goldman Sachs pension in addition may also clarify why he is seemingly trying to turn the Securities Regulator into a Crypto Regulator by almost fully focusing on crypto.

Asked about the recent property troubles in China and what SEC is doing to protect investors in US and whether anything has been learned from 2008, Gensler gave a generic answer that basically said nothing.

SEC in 2008 completely dropped the ball by allowing mass market manipulation through credit rating agencies giving AAAs to junk assets after such agencies were paid by the asset manager in question for the rating.

On Gensler’s watch, a short squeeze of GME occurred due to hedge funds being caught naked short selling some 140% of all shares in existance.

Yet SEC is going after Robinhood and after the “gameification” of investment, which translates to SEC is going after retail investors for caching this obvious market manipulation to their great profit, rather than after hedge funds that engaged in an objectively make believe behavior with one of them going bust.

Those hedge funds are playing with investors’ money, and therefore you’d expect SEC to provide some investors’ protection to avoid another situation where a public company is unduly almost bankrupted.

Yet we get radio silence, with SEC also failing in its duty to provide Congress reports on capital formation as Congress has demanded, with the very big question here being whether start-up investment should in this modern age be fully limited to just millionaires like Gensler, or whether the public can also reap the fruits of capitalism and entrepreneurship by funding today’s innovators.

The answer from Gensler appears to be clear. Attack retail investors and thus the public, as well as any emancipatory means that gives them greater access to investments, to protect in the process his real paymasters, in this case Goldman Sachs.

Thus we consider it self evidently obvious that it is in the public interest to fully publish his financial disclosures as below.