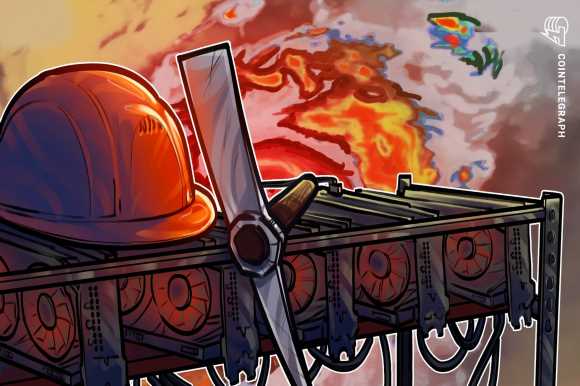 With many parts of Texas enduring days of temperatures well over 100 degrees Fahrenheit in July, many crypto miners have shuttered operations in anticipation of the state’s energy grid being unable to meet demand.

The Electric Reliability Council of Texas, or ERCOT, on Sunday called on Texas residents and businesses to conserve electricity with “record high electric demand” expected on Monday. According to ERCOT’s forecast, demand for electricity in Texas — due in part from running air conditioners amid extreme heat — could surpass the available supply.

The energy supplier’s prediction model showed demand could reach a record high of 79,615 megawatts (MW). While energy costs in Texas in June were reportedly lessened due to increased production from wind and solar, ERCOT reported on Sunday that wind generation was “generating significantly less than what it historically generated in this time period” — less than 8% of capacity when demand was predicted to be highest.

Many crypto miners in the Lone Star State have announced they have already scaled back or shut down operations in anticipation of demand Texas’ energy grid may not be prepared to handle.  In a Monday announcement on Twitter, crypto miner Core Scientific said it had powered down all its ASIC servers located in the state until further notice “to provide relief to people in Texas.”

A Riot Blockchain spokesperson told Cointelegraph its Whinstone facility in Rockdale had curtailed energy use at ERCOT’s request during the summer months, consuming 8,648 MWh less. Argo Blockchain CEO Peter Wall also said that the firm had also reduced operations in the state — likely referring to its Helios facility in Dickens County.

“In times of high-power demand, we believe that people should take priority over crypto mining,” Wall told Cointelegraph. “When ERCOT sends out a conservation alert, we take it seriously and curtail our mining operations. We did this again this afternoon, as did many of our peers in the mining space.”

Mining firms operating in Texas during the winter months have faced similar challenges since 2021, when freezing temperatures nearly caused the entire grid to shut down — instead, many parts of the state were without power for days. In February, Riot announced that it had shut down 99% of its operations in advance of a possible repeat winter storm, predicted to demand roughly 50,000 MW of electricity — 62% of what Texans may be attempting to draw from the grid on Monday.

ERCOT’s announcement came as many crypto mining firms continue to set up new operations in Texas, seemingly attracted by less regulatory oversight and lower energy costs. In June, Riot Blockchain said it planned to “ship the balance of its S19 miner fleet” from New York to Texas, and Switzerland-based crypto mining firm White Rock Management announced it will be expanding its operations to the United States — starting with Texas.