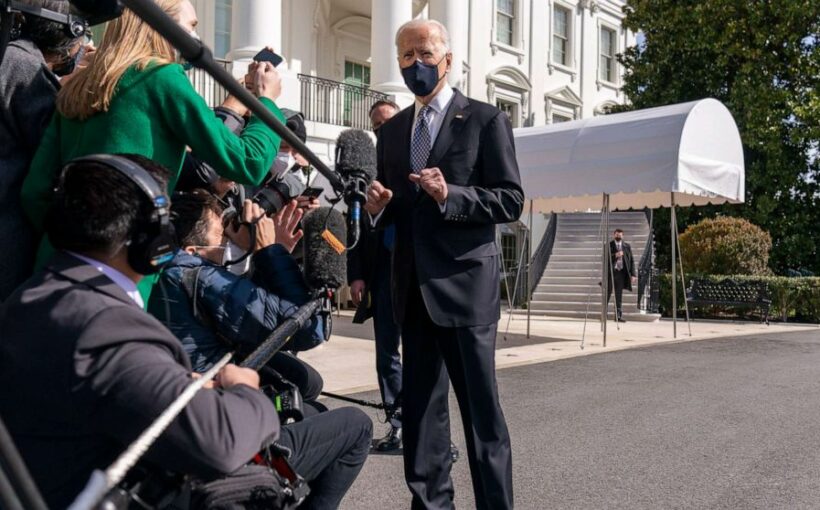 President Joe Biden holds the first news conference of his time in office Thursday afternoon riding high — his first big legislative ask in the bag, COVID-19 vaccinations picking up, the economy ready to roar and the pace of Washington largely matching the calmer tone he has set.

He also holds that first news conference tested in new ways — facing a humanitarian crisis at the border, two mass shooting tragedies that expose stubborn political realities, restlessness in both ideological wings of the Democratic Party and with partisanship just as elusive as it was under his predecessor.

The last few weeks have been both heady and humbling for the Biden White House. And a wide-ranging news conference means headlines are virtually guaranteed to be made that go beyond messaging plans.

Biden is likely to be pressed for answers on immigration, taxes, guns and the filibuster. Perhaps his biggest challenge will be to assert control over events that have spiraled around him and the nation just in the week-plus since the news conference was announced.

The president and those around him continue to think big, with major legislative packages that carry deep structural reforms on the wish list. Competing dynamics among both Republicans and some Democrats are pushing him to aim smaller.

Two months into his presidency, Biden remains more popular than not, though that doesn’t necessarily translate into political sway. He gets to tell his story on Thursday, just not entirely on his own terms.

The RUNDOWN with Averi Harper

Vice President Kamala Harris is taking on her first high-profile assignment and it is laced with political peril. Biden tasked her Wednesday with addressing the increased migration from Central America and Mexico to the U.S.

House Republicans have already begun to label the dire situation at the border the “Biden Border Crisis,” despite its predating the current administration. Harris’ assignment also comes as a delegation of Senate Republicans travel to the border Thursday eager to seize the opportunity to slam Biden with an eye toward the midterm elections. Border issues are undoubtedly influential in states like Arizona where Republicans are hoping to pick up congressional seats.

Harris, hours before the announcement of her assignment, aimed to temper expectations on when there would be any sort of resolution to the conditions at the border indicating it would not “be solved overnight.”

“Look, we’ve been in office less than 100 days,” said Harris. “We are addressing it. We’re dealing with it, but it’s going to take some time.”

The gargantuan task of stemming the migration flow is in line with the scope of other unenviable jobs former U.S. presidents have bestowed upon their deputies. Former Vice President Mike Pence was tasked with handling a pandemic that spiraled out of control. As vice president, Biden failed in his effort in the Obama administration to push for gun reform after the 2012 shooting at Sandy Hook. And former Vice President Dick Cheney’s claims of “weapons of mass destruction” as the justification for the “War on Terror” live in infamy.

Harris will enlist the help of numerous Cabinet members, international organizations and government officials in Mexico and Northern Triangle nations to address the issue. The results of the effort could either bolster confidence in Harris’ foreign policy chops or be a blemish on her tenure.

The TIP with Alisa Wiersema

The intersecting goals of lawmakers’ messaging and tech giants’ attempts at political rebranding are set to be on full display as the House Committee on Energy and Commerce takes on the topic of “social media’s role in promoting extremism and misinformation.” The high-profile nature of Thursday’s hearing is centered on the testimonies of a trio of celebrity CEOs including Facebook’s Mark Zuckerberg, Google’s Sundar Pichai and Twitter’s Jack Dorsey.

Zuckerberg’s submitted testimony offers a preview of the issue that’s likely to be the root of debate. After battling a litany of unsavory headlines about Facebook’s role in cybersecurity dangers, election misinformation and the fostering of extremist content, Zuckerberg now says Congress should step in to rework Section 230 of the Communications Decency Act — the very law that allowed his company, and many others of its kind, to succeed by immunizing them from liabilities associated with the content users post. The law also says companies are not liable for removing content they deem as offensive.

“Instead of being granted immunity, platforms should be required to demonstrate that they have systems in place for identifying unlawful content and removing it,” Zuckerberg says, adding that “platforms should not be held liable if a particular piece of content evades its detection … but they should be required to have adequate systems in place to address unlawful content.”

Both sides of the aisle tend to agree that the 25-year-old law needs to be better adapted for modern times, but they don’t agree on the parameters for why it needs to be changed. Republicans are likely to cite former President Donald Trump — who is banned from virtually all social media platforms — and his allies’ invocations of Section 230 in their allegations of social media censorship aimed at conservatives. Meanwhile, Democrats could point to the Jan. 6 riots as their latest example of how companies ignore the spread of dangerous information online until it is too late.

ABC News’ “Start Here” podcast. Thursday morning’s episode features ABC News Chief Washington Correspondent Jonathan Karl, who tell us what options President Joe Biden has for gun legislation in an evenly divided Senate. Then, ABC News’ Ignacio Torres describes what the press saw as it was let into a migrant holding facility for the first time under the Biden administration. And Diana Berrent from “Survivor Crops” explains why the brain has become the focus of COVID ‘long haulers’ investigation. http://apple.co/2HPocUL