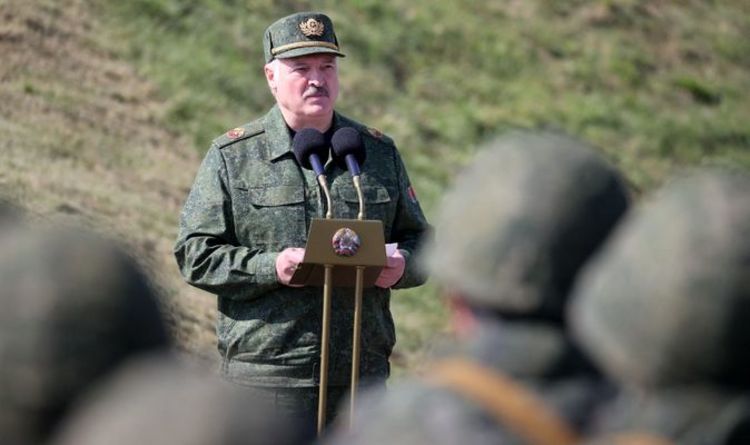 This comes as Belarusian officials have been accused of sending thousands of refugees to the Polish border, as part of an attempt to “destabilise” the EU. Speaking to the Financial Times, EU diplomats said they were considering imposing a range of sanctions on Belarusian officials, a Syrian airline and a hotel in Minsk, as part of an attempt to pressure Belarusian dictator Alexander Lukashenko to stop the flow of migrants.

Referring to the sanctions, a senior EU official said: “When applied, these measures will have a tangible impact on the current situation.

“We continue our outreach to countries of origin and transit. Other contacts are planned over the next days.”

The sanctions have been planned for organisations or individuals involved in facilitating the movement of people from regions such as Syria, Yemen and Iraq to the border between Belarus and the EU.

The list so far includes Syrian airline Cham Wings, which runs flights to Belarus, and Hotel Minsk, which houses migrants in the country. The list also reportedly includes more than two dozen Belarusian officials and could extend to Minsk airport.

EU officials are hosting a meeting in Brussels on Monday, to discuss the scope and legal basis for the sanctions.

However, officials have said that the final package may take weeks to finalise as it will involve coordination between the UK, Canada and the US.

Earlier this week, Mr Lukashenko threatened to retaliate if the EU stepped up sanctions on the country, alluding to the possibility of cutting off gas supplies.

In comments to officials released by the presidency, Mr Lukashenko said: “If they impose additional sanctions on us… we must respond.

“We are warming Europe, and they are threatening us.”

Later, in a press conference, the Belarusian leader said: “You can go choke on your sanctions… You are American lapdogs!”

Russia supplies about 40 percent of the EU’s gas, with about a fifth transiting through Belarus.

While the Kremlin has claimed that Russia is a reliable gas supplier – and that Mr Lukashenko did not consult Moscow before making the threats – Russia has demonstrated its support for Belarus.

Just two days before, Mr Putin flew two nuclear bombers over Belarusian air space, which – according to the Russian defence ministry – were sent in support of Mr Lukashenko.

During a parliamentary session on the crisis, he said: “This attack which Lukashenko is conducting has its mastermind in Moscow. The mastermind is President Putin.”

France has also hit out the Belarusian attack, with French Secretary of State for European Affairs, Clement Beaune calling it a “migratory attack” designed to “destabilize the European Union.”

Mr Lukashenko denied allegations that the flow of migrants is part of a Belarusian attack on the EU, instead accusing America of having “invited” them and expecting “Europe and Central Asia to take them in.”

Earlier this week, the Polish government sent 12,000 troops to the border to stop the flow of migrants and reinforce the 10,000 men already stationed there.

Calling the wave of refugees “an invasion”, the Polish government has said it is “determined” to “defend” Europe.

Mateusz Morawiecki, the Polish Prime Minister, said: “The Polish government is determined and we will defend the security of our country and the entire EU, respecting our international obligations and bearing in mind, above all, the interests of the state and the safety of Polish soldiers, Border Guard officers and citizens.”