Home » Politics » Military must do more to weed out white supremacists, extremists

You’re reading Our View, one of two perspectives in Today’s Debate.

For the Opposing View, read “’We are going to tackle this problem (of extremism) head on’.”

When a closet extremist named Brandon Russell joined the Florida Army National Guard in 2016, examiners took note of an odd tattoo on his right shoulder.

It looked like a radiation-warning symbol, but apparently didn’t raise concerns. It should have. It was the emblem for a violent neo-Nazi organization Russell had founded. “I was 100% open about everything with the friends I made at training,” Russell later boasted online about the acceptance of his views among other troops. “They know all about it. They love me too cause I’m a funny guy.”

Extremism in the military is hardly a laughing matter, and evidence is mounting that it’s long past time for the Pentagon to take it seriously.

“The military has a growing problem with white supremacy and extremism because our country does,” Lecia Brooks, chief of staff for the Southern Poverty Law Center, told lawmakers last week.

About every third service member surveyed told the Military Times in 2019 that they saw evidence of white supremacist and racist ideologies in the service, up from 1 in 5 in 2018. 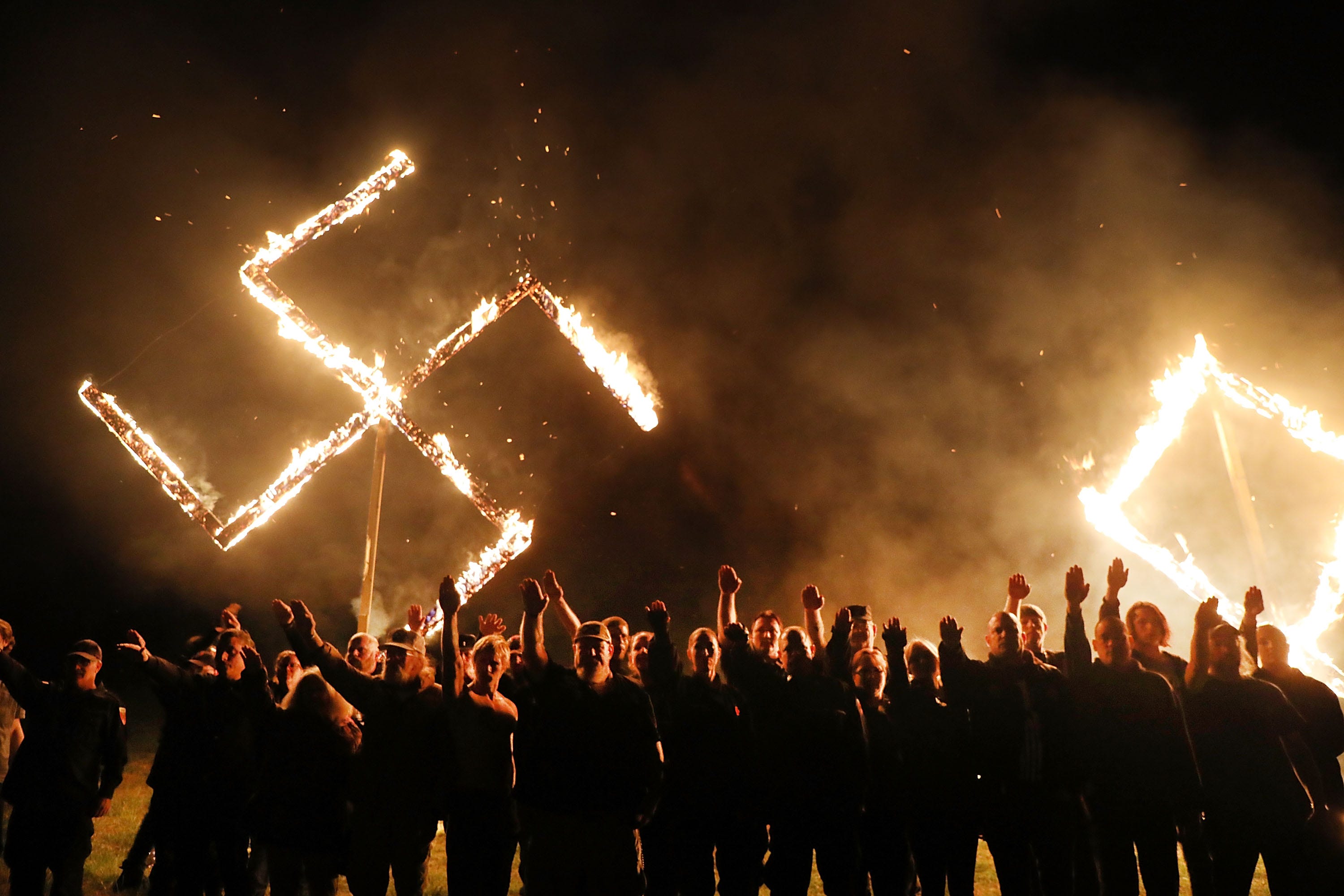 Members of the National Socialist Movement, one of the largest neo-Nazi groups in the U.S., hold a swastika burning after a 2018 rally in Georgia. (Photo: Spencer Platt/Getty Images)

Russell was sentenced to five years in prison in 2018 for having explosives material. A 22-year-old soldier was charged last year with plotting with his neo-Nazi group to ambush his own Army unit. An Air Force sergeant linked to the boogaloo extremist movement was accused last year of murdering a federal security agent. In June, three men also linked to the boogaloo movement — an Army reservist and Navy and Air Force veterans — were charged with plotting to attack protesters in Las Vegas.

And most recently, a USA TODAY analysis of those arrested in connection with the insurrectional riot that led to the sacking of the U.S. Capitol on Jan. 6 found that 34 were former or current military members. One was a Marine Corps veteran who had served as a crew chief on a presidential helicopter squadron.

To be sure, there’s no evidence extremists are disproportionately represented among America’s more than 2 million active-duty and part-time troops. The military, after all, is only a reflection of the society from which it draws volunteers.

But soldiers, sailors and others are also a select group. While recruitment goals are always a challenge, no one can serve unless they meet specific health and psychological criteria. There must be screening for extremism.

But the Pentagon needs to do a lot more.

The military says it’s already moving toward accessing an FBI library on tattoos so they recognize a neo-Nazi symbol when they see one. (All recruits are thoroughly examined during medical reviews.) The Pentagon is also working with the University of Maryland to explore private-sector products that can review, at scale, activity by recruits on social media. A Defense Department review last year called social media “the loudest indicator of white supremacy/white nationalism involvement.” Congress intends to add to the Uniform Code of Military Justice a law against violent extremism. (The same proposal was pulled from this year’s Defense bill by the Trump administration.) This new law will help track the volume of instances where service members are discharged for such conduct, something the military cannot now say.

The Pentagon needs to be transparent with these changes, showing when and how they’re being implemented to reassure Americans the problem is getting fixed. A new inspector general position this year to monitor extremism should make this doable.

But there remain crucial gaps. What about a soldier who becomes radicalized after entering the service?

As California Rep. Jackie Speier argued in a letter to President Joe Biden, whatever vigilance is designed for screening recruits has to be used for those already in the ranks. At least one checkpoint would, and that’s when troops seek security clearances for certain job assignments. Certainly a review of social media behavior — applicants would be required to surrender online handles and websites visited — would be crucial, particularly considering how much extremist ideology is online.

Hate groups place a premium on recruiting U.S. service members who have prized skills in weapons training and military experience. And their presence in an organization, given society’s high respect for the American military, lends credibility to a cause.

The Pentagon not only needs to cut off this stream of talent for extremist groups, but also openly demonstrate to the country that it’s getting the job done.