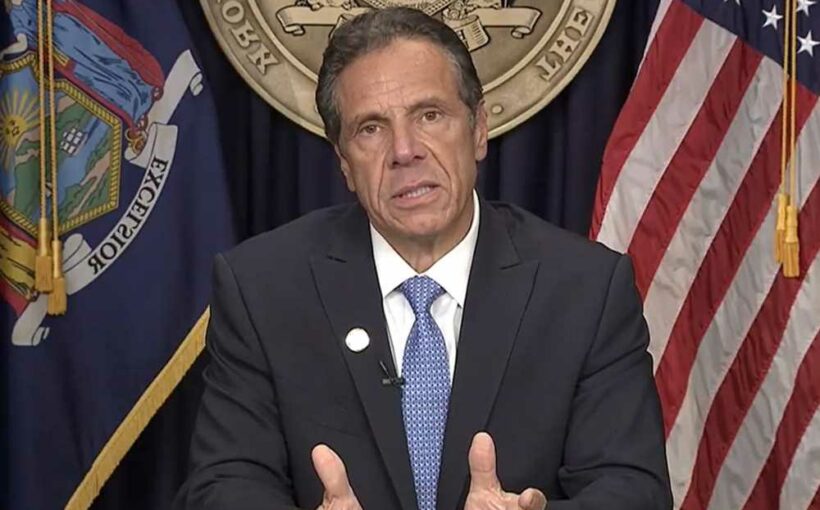 Gov. Andrew Cuomo announced his resignation on Tuesday under threat of impeachment following the release of a scathing Attorney General report in which investigators concluded that he sexually harassed several women in violation of state and federal law.

“I think that given the circumstances, the best way I can help now is if I step aside,” Cuomo said from his Manhattan office.

Cuomo’s resignation will be effective in 14 days, the governor said.

Under state law, Lt. Gov. Kathy Hochul will assume the role of governor, becoming the first woman to lead the Empire State.

Cuomo’s resignation marks a stunning, ignominious end to the Democrat’s three-term run as governor — the same number of terms to which his father — the late Gov. Mario Cuomo whom the younger Cuomo idolized — was elected.

It also represents a reversal from Cuomo’s repeated refusal to resign, after documentation of his rampant, illegal sexual harassment was released by the AG investigation.

The defiant public statements refusing to step aside included Cuomo releasing a bizarre, pre-recorded video that included a montage of the governor kissing and touching people, and Cuomo’s outside lawyers attacking some of the women who accused him of sexual harassment and questioning the credibility of James’ investigation.

He initially defied demands to step aside from the United States president, dozens of major New York Democrats, and regular Empire State residents.

President Joe Biden said, “I think he should resign,” in the wake of the Attorney General probe.

In addition, unions that formed the core of his political base jumped ship following the release of James’ probe, as did Democratic Party Chairman Jay Jacobs, formerly a close ally, leaving few Cuomo backers left. By the day after James’ office’s findings were released, a majority of state Assembly members favored impeachment.

The avalanche of officials saying it’s time for Cuomo to go came as public opinion quickly shifted against him, as 59 percent of New York State residents believed he should resign and an equal amount say he should be impeached if he didn’t, according to a poll conducted the same day the report was released.

A subsequent survey showed that 70 percent of voters believed the governor should resign, and 63 percent were in favor of state lawmakers impeaching the governor.

Those assessments of Cuomo’s popularity came before administrative assistant Brittany Commisso — previously identified in James’ report as “Executive Assistant #1” — revealed her identity and spoke on national TV about her creepy encounters with the 63-year-old governor. Commisso, 32, charges the governor groped her on two occasions — allegations that mean Cuomo could face “a couple” of misdemeanor charges as a result of a criminal complaint she filed in Albany.

On the heels of the escalating fallout, Melissa DeRosa, a longtime top aide to the governor, stepped aside, and a handful of local politicians took early steps toward running to succeed Cuomo as the state’s chief executive.

The fallout was not solely political.

Prosecutors in at least five New York State counties — including Nassau County, Manhattan, and Westchester County as well as Albany — have launched separate criminal probes following the report’s substantiations of forcible touching of multiple women. And with Cuomo spending time fighting for political survival — including by orchestrating a failed deal to agree not to seek a fourth term in exchange for lawmakers dropping their impeachment process — New York State’s bureaucracy came “to a grinding halt.”

In his third term, Cuomo, 63, was beset by explosive twin scandals, including accusations of sexual harassment against 11 women that were documented in an exhaustive probe by Attorney General Letitia James. In it, Cuomo was exposed as a creep who sexually harassed female subordinates less than half his age — including by touching their “intimate body parts” without consent.

“These interviews and pieces of evidence revealed a deeply disturbing yet clear picture: Gov. Cuomo sexually harassed current and former state employees in violation of federal and state laws,” said James at a press conference Tuesday.

“This investigation has revealed conduct that corrodes the very fabric and character of our state government, and shines light on injustice that can be present at the highest levels of government.”

In the most disturbing of the claims, Commisso, the current aide, who was previously anonymous, alleged that the governor summoned her to his quarters at the Executive Mansion, then reached under her blouse and groped her, according to testimony she provided for the probe.

In a previous statement, Cuomo called that woman’s account “gut-wrenching,” but denied inappropriate physical contact with her or anyone else — a denial he has repeated frequently since the scandal erupted.

The torrent began in late February, when Lindsey Boylan, 36, penned a Medium article accusing Cuomo of kissing her on the lips without warning and suggesting that they pass a flight by playing strip poker.

Less than a week later, Charlotte Bennett, 25, told the New York Times that Cuomo asked probing questions about her sex life that left her convinced he “wanted to sleep with” her.

One day after Bennett came forward, Cuomo half-heartedly apologized for making what he characterized as “jokes” that he admitted could be construed as “unwanted flirtation,” but denied any bad intentions and maintained he never touched anyone inappropriately.

Those allegations spurred bipartisan outrage and resulted in James’ office launching an independent investigation — despite the administration’s efforts to control the probe.

But they were quickly followed by a series of allegations.

On March 1, Anna Ruch, 33, alleged that Cuomo grabbed her and kissed her cheek as she tried to pull away at a 2019 wedding — the first time they met.

And on March 6, another two former staffers came forward.

Ana Liss, 35, told the Wall Street Journal that Cuomo once kissed her hand, asked if she had a boyfriend and made other remarks that left her feeling like “just a skirt.”

And Karen Hinton, 62, told the Washington Post that in 2000, Cuomo, then the head of the federal Department of Housing and Urban Development, grabbed her in a “very long, too long, too tight, too intimate” embrace inside a dimly lit hotel room in Los Angeles.

In an Albany press briefing held between Ruch’s allegation and those of Liss and Hinton, an “embarrassed” Cuomo offered a conditional apology “if [his accusers] were offended,” while denying allegations that he touched anyone inappropriately.

At the time, he vowed not to resign.

After Liss and Hinton spoke up, Cuomo repeated that promise during another briefing, which also saw him try to explain away his treatment of Liss as “commonplace” niceties in his line of work, while characterizing Hinton as a “longtime political adversary” with ulterior motives.

Since, a state trooper assigned to the unit tasked with protecting Cuomo joined the ranks of the accusers.

The trooper, who has not been publicly named, told investigators that Cuomo had her transferred to the Protective Services Unit following a chance meeting at the RFK Bridge in 2017, despite her not meeting the qualifications for the unit.

Once she was assigned to the unit that kept her in close contact with Cuomo, the governor kissed her on the cheek, touched her without warning on the back and stomach, and made numerous sexually suggestive comments in her presence, she told investigators.

The sexual harassment scandal exploded as Cuomo was already facing significant scrutiny for his administration’s handling of the COVID-19 in nursing homes.

As the contagion reached New York in March 2020, Cuomo’s Department of Health issued a directive forbidding nursing homes from turning away patients on the basis of a positive coronavirus test — even as he publicly acknowledged the ferocity with which the virus preyed upon the elderly.

Though Cuomo quietly shelved the policy in May 2020, he never fully admitted to its potentially fatal implications, as the death toll among nursing home residents rocketed into the thousands. A New York State Bar Association report found that the state directing to admit COVID-19-positive patients was responsible for more deaths in the facilities.

“Although a determination of the number of additional nursing home deaths is beyond the capacity of the Task Force, there are credible reviews that suggest that the directive, for the approximately six weeks that it was in effect, did lead to some number of additional deaths,” read the report.

Meanwhile, the Cuomo administration undercounted deaths in the facilities by as much as 50 percent, according to a damning investigation by state AG James, released in January.

Privately addressing Democratic state lawmakers the next month, top Cuomo aide Melissa DeRosa admitted that the administration intentionally obscured the numbers because it feared a federal probe, The Post exclusively reported at the time.

Ironically, that attempted cover-up incurred the very federal Department of Justice investigation that the administration had been seeking to dodge.

Though the DOJ has since dropped that probe, Cuomo still faces a potentially more serious investigation by the FBI and Brooklyn US Attorney’s Office.

As Cuomo sought to contain that scandal, his intimidation tactics drew scrutiny, with a slew of New York political veterans decrying him as a bully.

Shortly after The Post broke the news of DeRosa’s admission, an enraged Cuomo allegedly phoned state Assemblyman Ron Kim (D-Queens), a frequent critic, at his home, demanding his help in mitigating the fallout — and threatened to “destroy” him if he refused.

Cuomo — who served as state Attorney General after he was Secretary of Housing and Urban Development under President Bill Clinton — has disputed Kim’s characterization of the call, insisting he never threatened him.

Along with the governor’s rampant sexual harassment documented by the Attorney General probe and nursing home controversy, Cuomo faced an inquiry into the $5.1 million book deal he inked for his pandemic memoir. The New York state Assembly’s Judiciary Committee had “detailed discussions” with its lawyers about Cuomo’s book deal, implicating DeRosa via “instructions she gave to the staff in the governor’s office to help with the manuscript for Cuomo’s book being pitched to publishers,” a source previously told The Post.

The book became a best-seller in 2020, after Cuomo’s daily televised pandemic briefings made him a pandemic-era hero for many worried liberals. But sales of the book dropped when he became embroiled in a sexual harassment scandal, and the publisher of the memoir stopped promoting it.