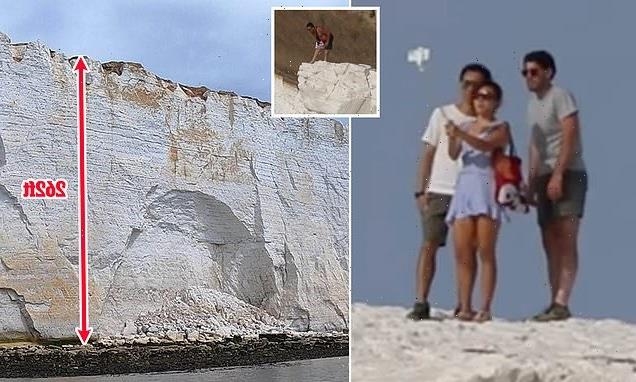 Height of stupidity! Coastguard slams beachgoers for ignoring warnings and posing for selfies on a CRACKED 262ft cliffs… just DAYS after huge rockfall

Daredevils posing for selfies on a crumbling cliff edge just days after a huge rockfall have been been criticised by wardens for their recklessness.

Maritime and Coastguard Agency officials fear other parts of the 262ft high ledge could break away at any time.

Despite this, the safety warnings appear to have fallen on deaf ears, as several people were filmed posing for photos using the dangerous cliff edge as a backdrop.

The coastguard also received an image from social media of a couple standing proudly near the ledge. 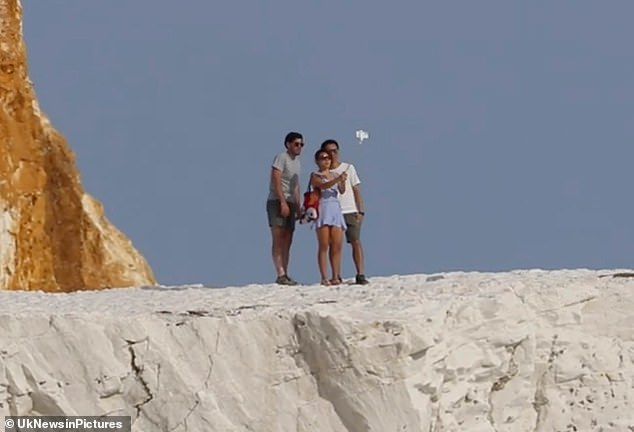 Safety warnings to avoid the cliff edge at Seaford, East Sussex, went unheeded as several people were filmed there posing for photos 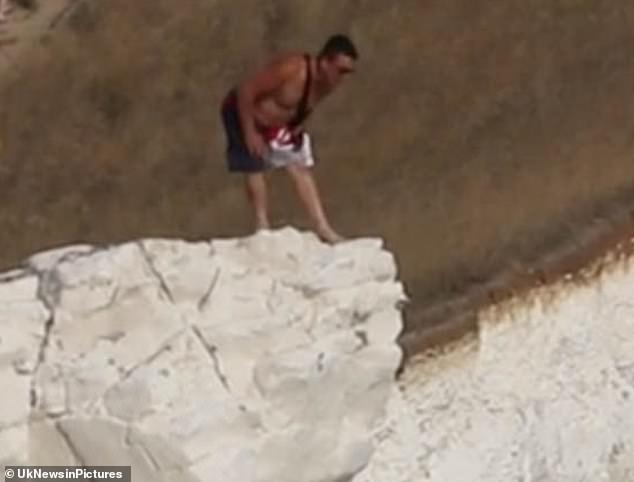 A man stands dangerously close to the precipice of the crumbling cliff at Seaford, East Sussex, and peers down at the 262ft drop below

A coastguard spokesman told the Sussex Express: ‘Less than a week after warnings about the dangerous cliffs at Seaford were published, we have received these pictures taken today a short distance away from the cracked cliff.

‘Extra signs are in place as well as roped off areas – although this piece [in the photograph] is not roped off.

‘Please keep at least five metres away from cliff edges. In a coastal emergency dial 999 and ask for Coastguard.’

‘The cliffs are extremely unstable and prone to regular chalk falls, and people should not underestimate the risks they are taking when they stand on top of the cliffs or walk along the cliff base. 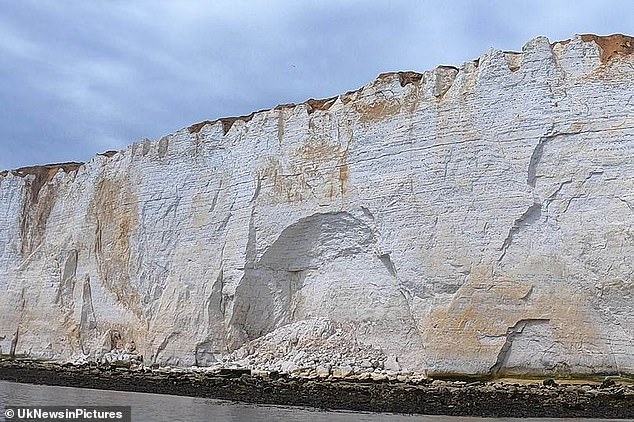 A large recess formed in the 262ft cliff at Seaford, east Sussex, after a rockfall of 50,000 tonnes of chalk

‘Visitors should also remember that it is very easy to be caught out by the incoming tide when walking on the beach and to check the tide times before they set out. We want people to come to East Sussex and enjoy its beautiful coastline, but to do so safely and be aware of the dangers.’

Any visitor who sees someone in danger or witnesses someone who has fallen is urged to call 999 immediately and ask for the Coastguard and not attempt to rescue those in danger.