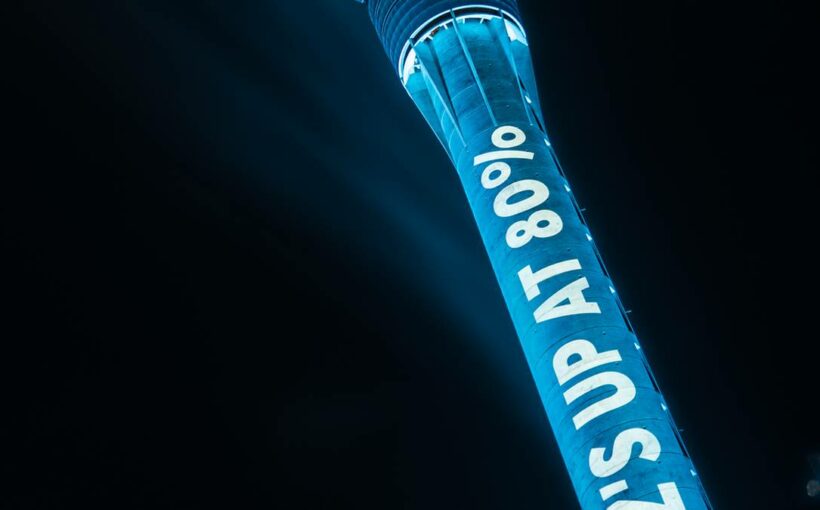 The iconic Sky Tower in Auckland was lit up last night in support of the nationwide Covid-19 vaccination campaign.

The light display came as SkyCity marked the milestone of 80 per cent of eligible New Zealanders being fully vaccinated against the potentially deadly virus.

As well as marking that milestone, last night’s ‘lights on’ recognised The 90% Project; the campaign run by NZME – publishers of the New Zealand Herald.

The campaign aims to get 90 per cent of New Zealanders vaccinated by Christmas.

“The teams in all of our businesses have been behind the vaccination goal from the outset and we wanted to find a way to celebrate how far Kiwis have come and encourage that final push to the 90 per cent mark.

“What better way to show our appreciation than by turning the Southern Hemisphere’s tallest tower into an icon of vaccination.”

The light display saw the Sky Tower glow with a mixture of brilliant white and blue light.

The tower’s base displayed messages of celebration to congratulate New Zealanders for achieving the vaccine milestone.

The messages read: “We’re at the pointy end”, “NZ’s up at 80%”, “It’s within arm’s reach”,and “Let’s push for 90%”. The light show, which was tested on Thursday night, will be displayed again tonight in a bid to encourage Kiwis to get vaxxed and hit the 90 per cent mark.

The special lighting of the Sky Tower was being made possible via the support of The Warehouse Group, 2degrees, Goodman Property and TBWA\NZ.

NZME chief executive Michael Boggs said: “The New Zealand Herald’s ‘The 90% Project’ has been an incredibly important initiative for all of us at NZME. We have been heartened and energised by the support the initiative has received from right across New Zealand.

“To have the backing of SkyCity, The Warehouse Group, 2degrees, Goodman Property and TBWA\NZ, to put the vaccination campaign up in lights this way will give the project another great boost.”

“It’s been an incredible effort from all Kiwis to get to us to 80 per cent double vaxxed and we wanted to make sure it was a celebrated moment,” TBWA\NZ group chief creative officer Shane Bradnick said.

“We saw creating messaging on the Sky Tower aligned to The Herald’s 90% project as a great opportunity, and it feels good to be able to acknowledge what Kiwis have achieved and encourage the final push.”