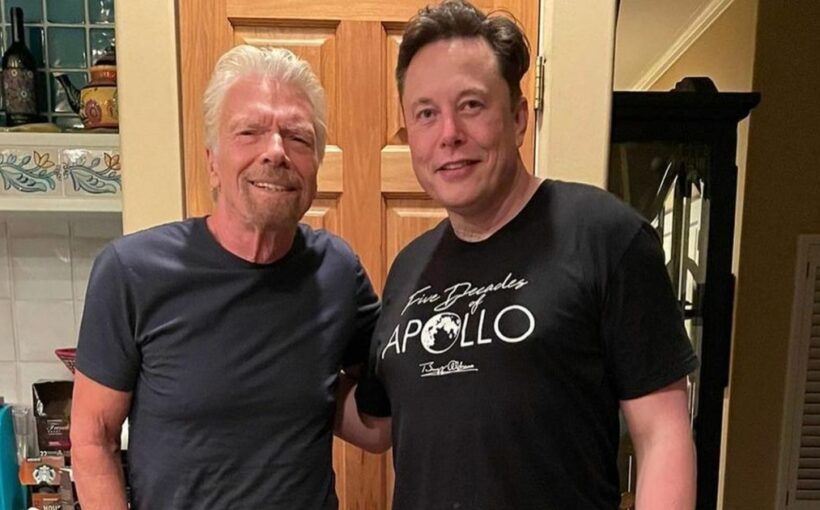 Elon Musk has snapped back at fans mocking Sir Richard Branson's kitchen for being "ugly".

The VSS Unity spacecraft returned the Spaceport America runway in New Mexico at about 4.40pm (UK time) after the four-minute flight into orbit.

Hours before the historic flight, Tesla boss Musk (a rival in the new space race among billionaires) was pictured meeting Sir Richard.

A tweet posted by the Virgin Galactic founder ahead of his flight said: "Big day ahead. Great to start the morning with a friend. Feeling good, feeling excited, feeling ready."

But the photo, taken in Sir Richard's kitchen, quickly drew criticism from fans on social media.

In a series of tweets, one person wrote: "To have billions of dollars and THOSE cabinets? what's the point.

"How can you be worried about space when you can't even manage the s**t right above the ground???"

They then posted a photo zoomed in on the cabinet handles with the simple caption: "Googly eyed ass finishings.

One Twitter user responded: "One can be a billionaire but still have an ugly kitchen."

Perhaps rather surprisingly, however, Elon actually replied to the tweet, explaining why the kitchen was so basic.

He wrote: "It was Richard’s rental house, which overall is great, but I agree regarding the cabinets haha. This was 3am, day of flight. Wasn’t expecting this brutal pic of me to be posted, but oh well."

The person who wrote the original tweet then replied: "Elon all I want is for you to have a happy life with nice cabinets and hemmed pants. I also would like money. From you. Please."

It has been reported that Musk will be heading to space on a Virgin Galactic rocket after purchasing a seat onboard. Seats have been selling for $250,000 (£180,000) each.

The Tesla founder said he rents the "awesome" 400 square feet unit from his company SpaceX and it sits on the land owned by the company at its Starbase headquarters in Boca Chica, Texas.

In a clip uploaded by Boxabl who designed the tiny prefab house, you can go on a virtual tour of the sleek and minimalist interior of the studio-style living space.

The house consists of a single square room zoned out into basic sections, including lounge space, a bathroom, a kitchenette, and a double bedroom.

He tweeted on June 9: "My primary home is literally a ~$50k house in Boca Chica / Starbase that I rent from SpaceX. It's kinda awesome though."

The billionaire added: "Only house I own is the events house in the Bay Area.

"If I sold it, the house would see less use, unless bought by a big family, which might happen someday."